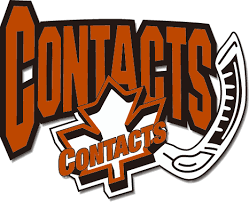 The Saskatoon Contacts showed no quit and came back from a 2-0 hole to overwhelm the Prince Albert Mintos 4-2 Tuesday Night. Alex Bernauer scored twice including the game winner. With the win the Contacts are still tied for first place in the Saskatchewan AAA Midget Hockey League with the Moose Jaw AAA Warriors.

The first period was a physical affair with massive hits delivered by both teams. The Mintos struck first. Dawson Springer released a wrist shot from the point where Austin McLean tipped the puck past Ethan Chadwick to break the deadlock. The Mintos had a couple chances to increase their on two powerplay chances, but the Contacts denied their northern rivals of an insurance marker in the period.

The Mintos jumped on the Contacts early in the second. A perfect pinpoint pass from Chase Bertholet found Kayden Skulmoski who made no mistake depositing the puck into the yawning cage, giving the Mintos a 2-0 lead. Then the Contacts took over the game. A wrist shot from Rylan Jockins deflected off the stick of his teammate Alex Bernauer and past Mintos’ goalie Spencer Welke to cut the Minto lead in half. Halfway through the period, Matthew Hodson released a shot that made its way through a crowd and beat an unsuspecting Welke to tie the game at two.

The Contacts jumped on the Mintos early in the third period and they never let up. At 3:20 a mad scramble in front of the Mintos net broke out and Bernauer found the loose puck and buried it for the Contacts first lead of the game. The Mintos had a chance to tie the game on a breakaway but they missed the net entirely. For the rest of the game the Contacts locked down the Mintos, limiting them to only three shots in the third. They would add an empty net goal thanks to Connor Yager and the Contacts knocked off the Mintos 4-2.

Coming up the Contacts will host the Battlefords Stars on Thursday night while Prince Albert will return to the Art Hauser Centre to host the Notre Dame Argos.