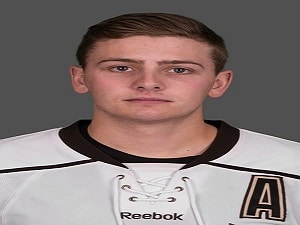 With an updated Wayne Fleming Arena as the stage, Manitoba Bisons men’s hockey drops the puck on a new season this weekend against the Lethbridge Pronghorns. The games take place Saturday, September 28 at 7 p.m. and Sunday, September 29 at 2 p.m.

Both games can be watched on CanadaWest.TV (fee required) or listened to on UMFM’s second stream.

The Bisons open the 2019-20 season with a host of fresh faces, with a deep recruiting class joining the team. There’s plenty of WHL experience in the first-years, with defencemen Matthew Stanley, Liam Schioler, and Brady Pouteau having played over 100 games combined in the ‘Dub. Pouteau, notably, earned the Regina Pats Rick Rypien Memorial Award in 2017-18 — given to the team’s unsung hero — after helping Regina reach the Memorial Cup final despite a nagging shoulder injury.

Behind that blue line are three new goalies for the Herd, who are competing to replace venerable alumnus Byron Spriggs. Tyler Brown and Riley Lamb both join Manitoba from the WHL — with Brown returning after rehab forced redshirt status in 2018-19 — while Jeremy Link played five years with the Winnipeg Blues in the MJHL.

Three fifth-years guide this young core for the Bisons in 2019-20. Wearing the “C” is defenceman Adam Henry, who was second on Manitoba and 8th among defencemen in 2018-19 with 16 points (six goals, two assists). Forward Jonah Wasylak will lead the attacking side of the ice for the Bisons, while Sean Christensen also returns to what should be a strong blue line for the Herd.

Lethbridge, who snagged the sixth and final conference playoff spot last season with a record of 9-17-2, return a strong winger in Medicine Hat native Torrin White in 2019-20 — certainly one to watch this weekend. White tied for the Pronghorns lead in goals (9) and was second in points (16) in 2018-19.

After this weekend, the Bisons play their annual non-conference weekend against NCAA teams, playing UND on October 5 and Omaha on October 7. Their regular season schedule resumes with road games at Mount Royal on October 11 (8 p.m.) and October 12 (4 p.m.).