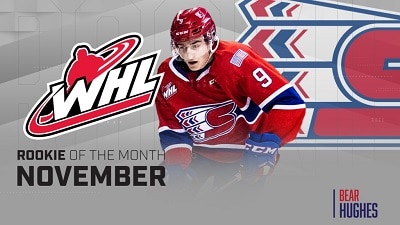 FOR IMMEDIATE RELEASE / TUESDAY, DECEMBER 3, 2019 Calgary, Alta. – The Western Hockey League announced today that forward Bear Hughes of the Spokane Chiefs has been named WHL Rookie of the Month for November 2019.

A ‘C’-rated prospect for the 2020 NHL Draft, Hughes recorded 12 points (5G-7A) and a plus-12 rating in 12 games during November. The Chiefs went 7-3-2-0 in the calendar month, remaining in third place in the competitive U.S. Division.

During the month of November, Hughes recorded points in eight of his team’s 12 games, posting four multi-point efforts. The final point of the month for the Port Falls, Idaho product was an assist on the game-winning goal in overtime against the Victoria Royals Saturday night.

Hughes and the Chiefs are in action Tuesday, December 3 (7:05 p.m. PT) when they play host to the Seattle Thunderbirds at the Spokane Veterans Memorial Arena.