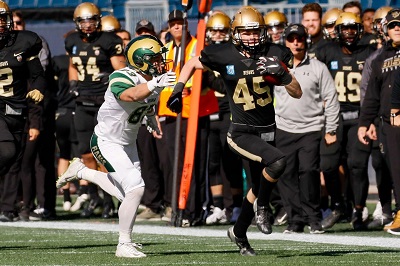 Saturday saw Bisons football earn a dramatic win over the Regina Rams, with a last-second field goal sealing the 27-26 win. Setting up the victory was a strong defensive performance, led by second-year SAM linebacker Reilly Gordon. For his performance, he was named the Canada West Football Defensive Player of the Week on Monday.

Besides an opening play 85-yard receiving touchdown by Kyle Moortgat, the Bisons were stout, holding the Rams to 315 offensive yards while forcing three turnovers. Gordon was a key part of two of those turnovers.

The Grande Pointe, MB native had an interception in the second quarter, returning it 32 yards to get the Bisons to the doorstep of the red zone. Manitoba was able to pay off the pick with a touchdown with an 8-yard touchdown pass from Des Catellier to Trysten Dyce.

Gordon also had a fumble recovery in the fourth quarter and had five unassisted tackles in the win.

The 6’2” linebacker, who is in general studies at the University of Manitoba, is the fourth Bisons football player to be named to the conference’s weekly honour.

Manitoba now looks forward to a Week 6 matchup with the Saskatchewan Huskies at Griffiths Stadium. Kickoff is Friday, October 4 at 8 p.m. CDT