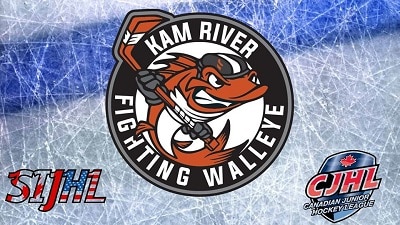 THUNDER BAY, Ont. – The Superior International Junior Hockey League announced Thursday the addition of a seventh franchise that will be begin play in time for the 2020-21 season.

The SIJHL’s board of governors unanimously accepted the expansion application bid submitted by the Dorsal Fin Entertainment Group that will see their team, the Kam River Fighting Walleye, officially become the league’s newest franchise, pending final approval from Hockey Canada and the Canadian Junior Hockey League.

Geddes, who played his minor and junior hockey locally, will serve as team president and is the founder of the Walleye organization.

Acting as the club’s general manager, McCallum previously was one of the original owners of the Thief River Falls Norskies of the SIJHL and prior to that was with the Dryden Ice Dogs in the early days of the league as their equipment manager and athletic trainer.

“Derek Geddes has done a tremendous job with the Walleye in the Lakehead Junior Hockey League since their inception, both on and off the ice. That along with their community involvement, game promotions and strong social media presence will be a boon for our league,” added Graham.

In joining the SIJHL, the club’s ownership group is excited for the opportunity as well also becoming a member of the CJHL.

“Dorsal Fin Entertainment Group is very grateful to the SIJHL and its board governors for accepting us into their group,” offered Geddes.

“We are very excited to be a strategic partner in growing this league and its product, both on and off the ice.”

The Fighting Walleye also appreciate the support they have received from its sponsors through three seasons competing in the LJHL.

“We would like to acknowledge all of the Fighting Walleye corporate supporters who have partnered with us over the last three years to make Walleye hockey a possibility. We look forward to having you on board as we move forward into this new chapter,” said the Kam River president.

As mentioned, the Fighting Walleye will play their home contests out of the Thunder Bay Tournament Centre.

“We are very excited with the partnership formed with the Tournament Centre and look forward to introducing SIJHL teams and our fans to a first-class venue,” presented Geddes. “We promise to provide an exciting product, on the ice, and a fan experience like no other.”

In preparations for the 2020-21 campaign, the team has actively begun their quest to hire its first-ever head coach.

“General manager Kevin McCallum is hard at work in his search for the Kam River Fighting Walleye’s first head coach and is working tirelessly with his scouting staff on recruiting the roster for our inaugural season,” summarized the team’s president.

The return of a second Thunder Bay-based team in the SIJHL in 2020-21 will mark the first time this has transpired in over a decade as the previous occasion two clubs from the Lakehead competed in the league was during the 2009-10 season.

“We look forward to the Walleye strengthening our league, the rivalry that will be created with the North Stars and the interest it will generate within the Thunder Bay hockey community,” offered the SIJHL Commissioner.

“A special thanks also goes to Scott Kellaway and Kris Kellaway, owners of the North Stars, for having the vision to see this come to fruition and once again have two Junior “A” teams in the Thunder Bay market,” finalized Graham.

Further information on the Kam River Fighting Walleye, including season ticket information, corporate partnership opportunities and the club’s website will be announced in the coming weeks.