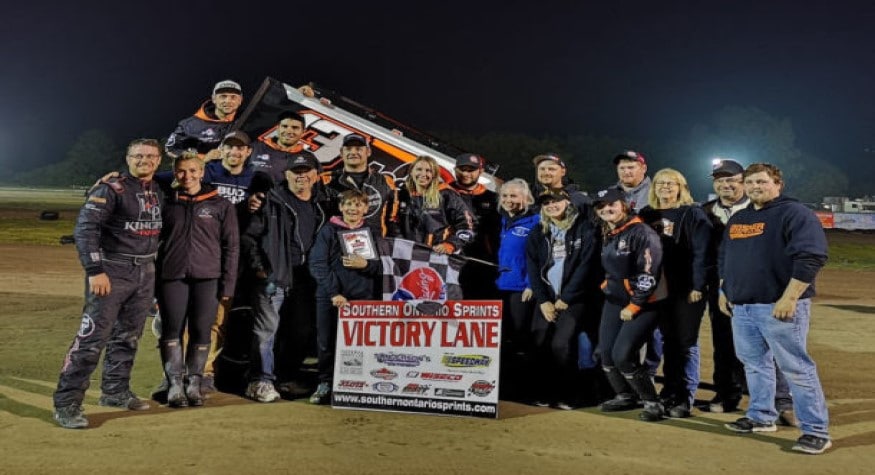 Source: Rev It Up Racing

Cory Turner started his Southern Ontario Sprints championship title defense in the most dominant way possible. The Caistor Centre, Ontario native started outside the front row and led all 25 laps to win the SOS season opener at Brighton Speedway on Saturday, June 15. In victory lane, Turner dedicated the win to his fallen crew member, Bob Deswiage, who passed away suddenly during the off-season.

“Our team has really hit their stride this weekend,” Turner said. “We lost a key part of our team over the off-season. He absolutely loved coming to this place and always had it circled on his calendar every year, so this ones for Bob. We wish he was with us and I know he still rides with us.”

Holly Porter held the pole position for the 25-lap feature with Turner starting to her outside on the front row. When the green flag dropped Turner quickly darted ahead of Porter in the outside lane on a very fast racetrack. A brief shower following the SOS qualifying heats kept plenty of moisture in the track come feature time.

Turner used the clean air to build a lead over Porter and younger brother Ryan Turner at the front of the field. By lap five, Cory had already worked his way into lapped traffic, but made quick work of the slower cars and maintained his advantage out front while Chris Jones and Mitch Brown completed the top-five.

On lap eight, the red flag waved when Al Gilletta Jr. tangled at the top of turn two with Aaron Turkey and rolled on his side. Gilletta suffered only minor damage to the nose wing and both cars were able to continue. On the single-file restart, Cory pulled away again from Porter while Ryan Turner mounted a challenge for second. Ryan briefly got to the rear tail tank of Porter’s No.1 but wasn’t in a position to make a pass for the position.

At the halfway mark, the second and final caution waved on lap 13 when Tyler Rand spun by himself at the bottom of turn four while racing with Warren Mahoney for a spot in the top-10. The second and final restart was the same result for the top three drivers, but on lap 15 Chris Jones stepped over the cushion in turn two and appeared to make some contact with an outside barrier, which allowed Brown to move into fourth. Jones continued to a fifth-place finish.

In the closing laps when Turner appeared to have victory sewn up, he was slowed by lapped traffic and saw his lead cut in half or more, but held on over the last five laps to claim the SOS season lid lifter.

“I didn’t know how big of a lead we had, I was just trying to get through the lapped cars as quick as I could,” Turner said. “Our car was absolutely phenomenal. I have to thank Jay and Celeste and Gord for putting this deal together for me and all of our crew guys between BBR and TTR have just been awesome. I’ve never gotten two wins in a weekend before, so this is our best weekend to date.”

The second-place finish was a strong one for Porter to begin her first full-season of 360 Sprint Car competition with the SOS. Ryan Turner rounded out the podium, his first such result this season.

The Southern Ontario Sprints continue their 2019 season next Saturday, June 22 at Merrittville Speedway in Thorold, Ont. for the Gary Cunningham Memorial. Race time is 7:00 p.m. For additional event information, visit www.merrittvillespeedway.com. The tour will then return to Brighton Speedway twice in July on July 6 & 27.