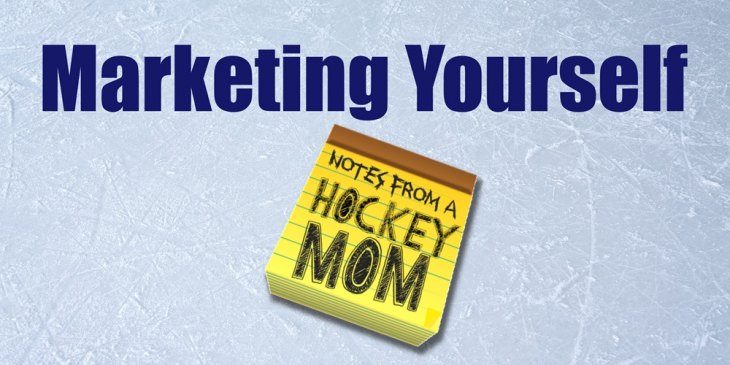 By: Michelle Anderson, Behind the Champ

It’s not really fair of me to tell players they will need to market themselves without really explaining what that means exactly. I promise it’s not as ominous as it sounds.
The first step is to know your product. Now that probably sounds pretty easy since the player is the product, but many times other people see us differently than we see ourselves, so it is a good idea to get some objective feedback.  Ask your coach what your strengths and weaknesses are. Your coach has a lot more life experience and probably has a better idea of what will appeal to other coaches about you. Ask him what you need to work on to get to the next level.  Then you can start getting your product (you) ready for market (the next level in hockey).  Work on your weaknesses, sure, but work on your strengths as well so you have something that really sets you apart from the thousands of other hockey players out there.

You also need to take your social media accounts into consideration.  Coaches will check you out, so you need to keep it professional.  Think of yourself like a big brand. Hockey is a business, and you should treat it as such.  Post highlight clips of yourself, pics of community service activities, working out, shoutouts to folks from your past who made you what you are today, throwbacks to youth teams and celebrations, etc. If your buddies make fun of you for it, let them.  After all, don’t you expect big companies to post videos of their latest product?  Of course you do!  Share your story in a professional way as if you were already in The Show.
One little caveat about highlight clips, though–If every clip is “he shoots…he scores!” Guess how quickly you get crossed off the list!  Those clips aren’t helpful to anyone except your own ego.  Show what you’re doing when you don’t have the puck.  Show how the play develops.  Show how quickly you hustle back on the backcheck. Show how you won that puck battle in the corner. Anything else besides just you scoring.
Now,you can’t just sit around waiting for the offers to start rolling in,or you might be waiting a while, but you also don’t want to be like one of those annoying ads everyone just clicks out of either.  This means you don’t just start sending out mass emails to every coach out there with links to all your amazing highlight clips.  That won’t get you anywhere.  Successful sales takes a little more finesse, and you don’t want to cross the line to sleazy.

Marketing for an athlete at its very basic level is just about building relationships and awareness.  You can start with that just by doing some research.  You can talk to coaches about their programs, ask them what their coaching style or philosophy is, ask them about awards they’ve won, ask them about their future needs for players, their future plans for the program, which showcases or tournaments they will be scouting, etc.  Start building a relationship by asking them questions about themselves and their programs.  You want this to be beneficial for both of you–you are figuring out which programs interest you, and by talking to you, the coach is figuring out if he is interested in you.  Coaches don’t want to waste time recruiting a player who doesn’t want to play for him.
Remember, hockey is a small world, so don’t just dismiss a relationship even if you aren’t interested in a particular program.  His brother or his college roommate or his buddy might be a coach somewhere else, and these guys absolutely pass along prospects.  Players do, too.  My own player has received calls from coaches asking if he knew any guys looking for a team.


Author: Michelle Anderson from Behind the Champ
Hello! I am a Minnesota hockey mom of 15 years with a son currently playing junior hockey. My son was 2 ½ when he saw his first hockey game, and he became obsessed with playing hockey himself. I thought, “He’s 2. It will pass.” It didn’t. I have to admit that I knew absolutely nothing about hockey when we first started this journey, but I learned quickly along the way thanks to all the other hockey parents out there. I also saw how much fun he was having so I joined a women’s league and learned how to play myself. The kids make it look a lot easier than it is, but it’s a beautiful game and tons of fun both to watch and to play, even badly in my case. I look forward to bringing you a hockey mom’s point of view to these shenanigans in the world of junior hockey.