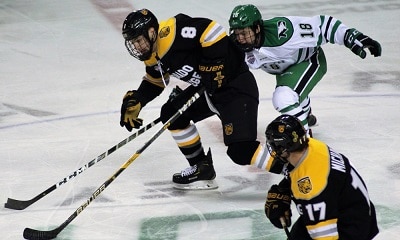 Last March, after the Frozen Faceoff Third-Place Game, Colorado College Tigers forward Westin Michaud was asked if he was going to return for his senior season. Michaud missed his freshman season due to injury and had a one more year of eligibility.

“I have no clue, honestly,” Michaud said. “After the season here we’ll have to talk and see what the options are. We’ve talked about coming back, maybe for a grad year.”

Then in April, Michaud announced that he was transferring to the University of North Dakota as a graduate transfer.

“Westin is a competitor and we’re happy to add that to our offensive group,” UND head coach Brad Berry said. “We were an attractive option for him to continue his career and our fans will like how he plays the game.”

On Wednesday, I had the opportunity to talk to Michaud during the annual UND Hockey Media Day. I was impressed with Michaud’s attitude. He’s ready to start the season and get after it.

“The process was, it was my senior class, and there are 10 guys that left, and I thought, they’re (C.C) kind of rebuilding a little bit,” Michaud said. “Unfortunately, the four years I was there with my senior class, and the players that I played with, we didn’t win (a lot of) games, we went from six to eight to 15, then 17, which were all losing seasons. I think they’re going in the right direction there, they’ve got a great program there at Colorado College, and,  I’m a proud alumnus. But for me, individually, I needed to change.”

I don’t think it’s going to take very long for Michaud to become a fan favorite. The Cloquet, Minnesota native oozes positivity. That should rub off on the other younger players in the room.

Last season, I had the opportunity to watch Michaud play five times. He’s is a high energy player that will give 100 percent every shift that he’s on the ice.

Michaud should make a sizable contribution to the Fighting Hawks offense. In 114 games with the Tigers, Michaud has scored (29g-33a–62pts), he’s also was a plus-seven.

“I’m a hard-driven working guy, blue-collar attitude, who loves to win,“ Michaud said. “If it’s a board game, I want to win. I don’t care who I’m playing against. I’m gonna do my best to win. Another thing that I really loved here was the culture.”

In the end, transferring to North Dakota really wasn’t a hard decision at all for Michaud.

“I used to watch UND when I was a kid. I still have a Sioux jersey in my closet. Coming here (to North Dakota), when I was younger, I think it was a key piece of me. I used to come here with my father for Bantam, Double AA games. We would come here and that was kind of our thing. At the end of the day, how can I pass it up with my father, and the memories here? We’re close where they can drive. We’re four hours away. I am pretty excited to be here.”

Michaud’s new teammates have been impressed with the effort he’s put out so far in practice. Apparently, he practices the way he plays. One gear, full speed ahead.

“He’s a fun guy,” senior captain Colton Poolman said. “On the ice, he’s your worst enemy. But as soon as he gets off, it’s all fun and games. I think it’s awesome to have a guy like that, who competes so hard in practice it that makes you become a better player, I think and he gets better from that as well. That’s something I think it’s really going to just shakes things up a little bit and keeps you on your toes. So,  I’m really excited to see how he’s gonna perform this year.”