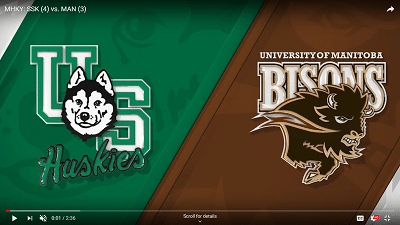 SASKATOON – The No. 2 Saskatchewan Huskies (20-4-2) extended their win streak to nine on Saturday night at Wayne Fleming Arena, coming back from two goals down to top Manitoba (9-13-2), 4-3.

Forward Ryan Carlson had a memorable opening three minutes for Manitoba, scoring twice within the first four minutes of play.

His first goal came 48 seconds into play, as he intercepted a puck in the neutral zone, deked past two Huskies and went five hole on Saskatchewan goalie Travis Child. The second tally came at 3:15, as forward Lucas Skrumeda stopped up and found Carlson trailing behind the play, who ripped it off the post and in.

The Huskies got both goals back however. They netted their first at 8:56 courtesy of forward Justin Ball. Teammate Collin Shirley had taken the puck at the right slot off a face-off win and got a solid shot off that wound up right at Ball’s feet on the rebound and he tapped it in.

Saskatchewan would then tie the game entering the second on a deflected shot from the blue line with 9:20 left. Forward Kohl Bauml was the beneficiary, getting his stick on a Gordie Ballhorn shot.

The Huskies surrendered just two shots against in the second period, doing a relatively good job of blocking shots while controlling the pace of play early on.

Saskatchewan also recorded the lone goal of the period at 1:05, as Logan McVeigh cashed in on his own rebound on a play that was set up by a Carson Stadnyk pass down low.

“[The Huskies] had a good start to the second period and we got hemmed in our zone,” Bisons head coach Mike Sirant said postgame.

“We just weren’t reacting and moving in our defensive zone and they built some momentum through some sustained offensive zone time. Once we got through that I thought we worked to get the momentum back and we had some good momentum there for the majority of the second period.”

Manitoba goaltender Riley Lamb kept his team in the contest on multiple occasions, including an absolutely phenomenal sequence of saves on Stadnyk with eight minutes left. The first came on a Bisons giveaway from in close and the second occurred right after, as he flashed the leather to rob Stadnyk on a backhand.

The hosts went to work trailing by one entering the third. Bisons captain Adam Henry — playing in the final home game of his career — evened things up at three 7:01 into the third with a wrist shot that made it through traffic.

Saskatchewan would score the game-winner with 2:58 left, however, as forward Jared Dmytriw broke in on an odd-man rush and beat Lamb low glove side.

Next up for Manitoba is a critical road tilt against Alberta, while the Huskies will host Regina. The Bisons are a point up on UBC for fifth and three points up on the Cougars for the sixth and final playoff spot in the conference heading into the last weekend of regular season play.

“It’s a tough one to not come away with at least a point,” added Sirant.

“For them to score that close to the end of the game, that would have been a huge point for us, but we’ve just got to get back to work on Monday and stick together and prepare for Alberta. We still control our fate in terms of the playoff picture.”