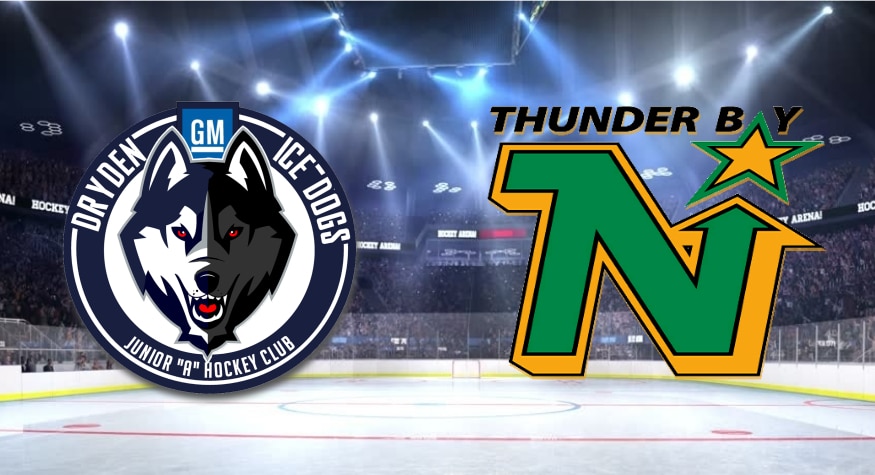 In front of 1250 junior ‘A’ hockey fans in Thunder Bay, Ontario on April 3rd at the Fort William Gardens and down 3 – 1 in a Superior International Junior Hockey League semi-final, the Dryden Ice Dogs hit the ice against the Thunder Bay North Stars looking for a win in game five of the best of seven SIJHL semi-final series.

Only 36 seconds into the opening period, Ryan Mignault finds the back of Dryden goaltender Jacob Anthony’s net to give the North Stars a 1 – 0 lead. Jacob Brown and Keighan Gerrie added the helpers on Mignault’s goal.  With an unassisted goal, Keighan Gerries brings Thunder Bay’s lead to 2 – 0 at the 14:02 mark of the first. Michael Stubbs registers the lone assist on Joel Willan’s goal 19 seconds into the middle stanza to increase the North Stars lead to 3 – 0.  Scoring his second of the contest at 5:20, Willan fires Thunder Bay’s fourth of game five with Brendan Gillis and Maxime Fortin drawing the contributors on Willan’s goal.  With Dryden on a powerplay with eight seconds remaining in the Ice Dogs 2018 – 2019 SIJHL season, Braden Shea finds the back of Thunder Bay netminder Brock Aiken’s net with Eric Stout and Trygve Many Guns adding the assists on Shea’s powerplay goal.  Jacob Anthony stopped 33 of 37 shots in Dryden’s 4 – 1 loss to the North Stars while Thunder Bay’s netminder Brock Aiken turned away 29 of 30 shots to advance to the 2019 Bill Salonen Cup finals.

The North Stars will now wait for the winner of the Thief River Falls Norskies and Red Lake Miners semi-final with the Miners leading the series 3 – 1 heading into Friday, April 5th matchup in Red Lake, Ontario.