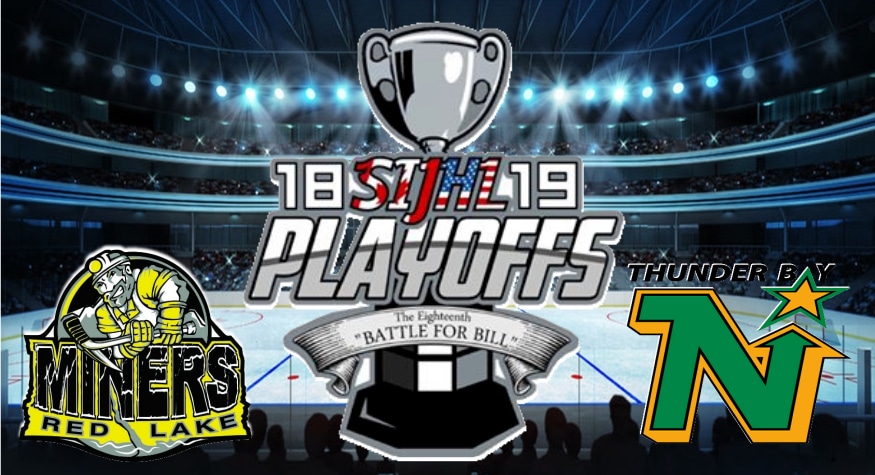 The Red Lake Miners stormed out to an early three-goal lead and never looked back in skating to a well-deserved 6-1 victory over the Thunder Bay North Stars Saturday, April 13th in game one of the Superior International Junior Hockey League Bill Salonen Cup Final at the Fort William Gardens.

It was the visiting Miners would strike first in the series, breaking out of their own zone with a long stretch pass from Michael Di Lullo that found Stratton Pickett, who in turn waited for Morgan Venne to outrace a backchecking North Stars forward before feeding him for a quick release that beat Thunder Bay starter Brock Aiken seven minutes into the contest.

Red Lake used the long breakout feed to add another as Matt Krawiec sent one up to Kyle Uzelman who came in and used a North Stars defender as a screen and whipped a high-rising attempt that eluded Aiken.

It was more Miners on the quick transition as they extended their early lead with Pickett finishing off a two-on-one with Venne.

They then chased Aiken 4:30 into the second stanza as they outworked a couple of North Stars that resulted in Liam Stalwick knocking in the rebound off a Tucker Evans opportunity.

With Dougie Newhouse entering in relief, the North Stars did get one back later in the session as Maxime Fortin lifted one airborne towards the goal that saw Ryan Mignault eventually stuff one in from close range past Red Lake netminder Zach Willms.

However, the Miners put the game away in the third with two more tallies to finish off the one-sided result.

Ethan Stuckless found defenceman Dante Tisi coming in undetected via the back door as he buried a cross-crease pass at 5:12.

Liam Stalwick then scooped up a giveaway by a Thunder Bay defender and skated in untouched and put in a second attempt past Newhouse at 12:24 to round out the night’s scoring.

Red Lake captain Di Lullo dished out a pair of assists to aid the cause for his side.

Willms was solid when called upon in the Miners net finishing with 45 stops to record the win.

Aiken was saddled with the loss for the North Stars, allowing four against on 20 attempts, while Newhouse eight of 10 in nearly 34 minutes of work.

Game 2 in this best-of-seven affair goes Sunday back at the Gardens at 7:30 p.m.